I will openly state that I absolutely believe there is a right and a wrong way of speaking about the Divine/God/Faith/Spirituality/etc.

This past weekend I had the opportunity to speak to MS and HS youth at a retreat camp in the South Jersey Pine Barrens.  It was a privilege to do so, and I was also incredibly happy to be making my way back into camp ministry after a number of years away from it.

I love the antics, the puns, the inside jokes, the camaraderie, the kids, all of it.  I never want to stop doing youth ministry in some capacity.  It keeps me grounded theologically as well as youthful in personality.  Without a doubt, some of my closest friends of my life have been ones I made while doing camp ministry side by side with them.

That being said, I have also heard plenty of camp pastors deliver sermons.  Some were absolutely fantastic, others, not so much.

I do not believe it is cynicism, but rather, discernment that I have slowly cultivated over the years of reading, listening, and discussing theology.  One of my favorite theologians, TF Torrance commented in his classes in Edinburgh, Scotland that the Gospel will slowly restructure the very way that we think and process the world around us.

In order for the Good News to be the Good News, it has to be good and it has to be news.  NT Wright said that this means it necessarily must bring relief and hope as well as be the proclamation of a new reality.  Often, we preach about God in such a way that it does not provide relief or hope but rather stress or despair.  In addition to that, we often preach the Good News as if it were advice: “It would be a good idea to adopt these virtues.”  The problem with this is that there is nothing cosmic happening.  It is entirely too personal and clearly illustrates why so much “Christian” literature today is found in the self-help isle of the bookstore.

At a church I used to work at as the Youth Director, I would write questions out for the HS youth to answer.  One day, I wrote this.  Born out of a personal reflection that there is something far larger going on than just a personal salvation through the man Jesus of Nazareth, I was beginning to realize that the Gospel is more concerned with the cosmic reconciliation of all things through the incarnate God in that same Jesus of Nazereth. (Colossians 1:15-20)

Below is what I wrote. 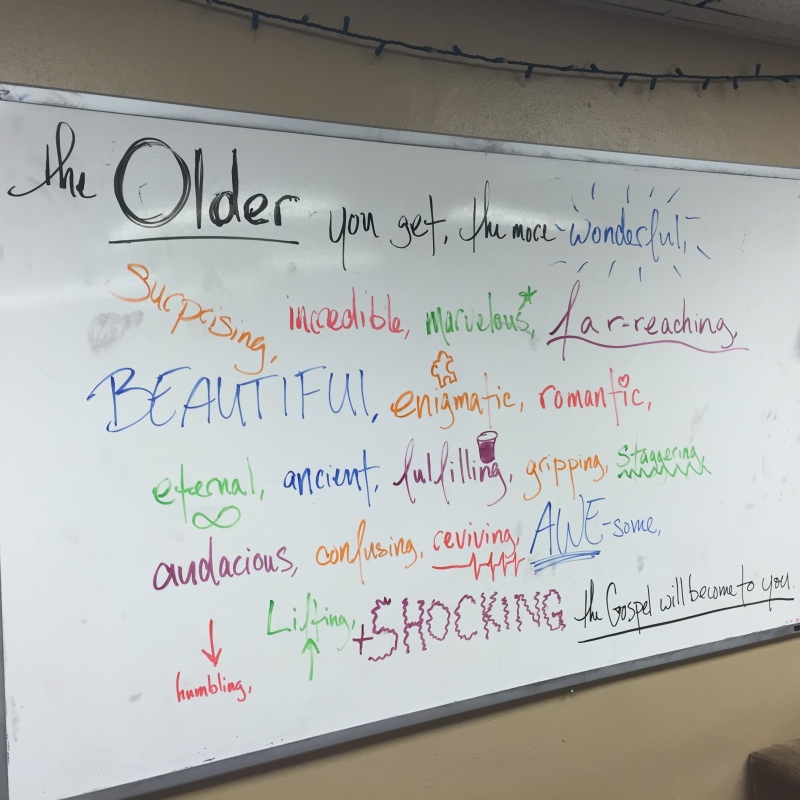 To reiterate what I spoke of above, I think there is a right and a wrong way of speaking about the Divine/God/Faith/Spirituality/etc.

I think it is entirely possible to talk about the Christian faith, using Christian terminology, in such a way that it is the opposite of the Christianity.  Ultimately, I believe that God is the fount of all goodness, beauty, truth and love.  Therefore, to speak of God as though God is the author or encourager of evil, ugliness, untruths and apathy/hate is unchristian.  Preaching often takes the form of shaming or humiliating us with the intention of cutting out our pride, but instead it cuts out our self-confidence as Children of God.  God has not ever, nor ever will be in the business of humiliating people.  Yes, we do that to each other, but when I read the stories of Jesus of Nazareth he seems far more interested in drawing doodles in the dirt than throwing shame at people (John 8).  Let us not make God the same kind of monsters that we are at our worst.

I also believe this poor theologizing is easier to recognize than we admit.  We often hear certain things we know that we disagree on some fundamental level, but in order to stay within a certain tribe we know we have to comply with their entire theological system no matter how much it churns in our stomach.  Our gut instinct is wisdom we don’t have the words for yet, and I believe this form of wisdom is also a gift or form of guidance from the Holy Breath of God.  I am all in favor of CS Lewis’ Mere Christianity project.  Pick and choose the best from every denomination and then move on to love God and neighbor as best as you are able in joy and gratitude.

The Gospel, if it really is true, does not allow us to maintain a small worldview.  It does not allow us to view Christianity as “Good Advice” rather than “Good News”.  From this day forward, try your best to preach to your own heart in such a way that recognizes God can be like a Lion but also a Lamb, and that the infinite and incomprehensible love “that moves the planets” (Dante) will always have the final word.